Finished using the méthode traditionelle, this is the non-Champagne descriptor
for a fairly involved, in-the-bottle, secondary fermentation process employed to
create premium grades of vins mousseux (sparkling wine); originating in one of
eight approved AOC’s in France for the wine style; according to the negotiated
regulations established in the 1970’s. The best known of these include Crémant
d’Alsace, Crémant de Bourgogne, Crémant de Limoux and Crémant de Loire.
Moreover, the latter is further distinguished as 3 parcels of unique terroir, whose vineyards sprawl along the valley slopes and banks of a meandering Loire River: Touraine, Anjou and the most prolific of all, Saumur – the fertile source for this
week’s DéClassé featured Bouvet Brut Excellence.

It’s an ebullient assemblage of mainly Chenin Blanc, the region’s flagship grape
that’s also known as Pineau de la Loire and a splash of Chardonnay, a migrated
variety that’s often referred to, generically, as white Burgundy – contributing
added depth and softness to the wine’s body, mouthfeel and range of aromas.
Aged in the winery’s deep limestone cellars, these wines must be left to mature
in-bottle for a minimum period of 12 months. However, as is the common case
with the finishing of non-vintage crémant (or Champagne, for that matter), the
vintner is free to incorporate into the final blend, a dose of stored wine from a
previous harvest – thereby better ensuring the year-to-year consistency of the
brand’s intended character and flavour profile.

As early as the 6th century, the monks of the Abbey of Saint-Maur had begun to
cultivate, refine and gradually proliferate some of the white wine yielding grapes
that now thrive in the valley’s chalky soils or pierres de tuffeau. This underlying,
light-coloured, fine-grained and fossil-laden limestone, with a long history of use
as a quarried building material, has also given the Loire’s photogenic cathedrals,
châteaux, monuments and towns their distinctively luminous personality. This both
above and below ground, as in the case of Maison Bouvet Ladubay’s surprising,
5 mile-long cellar. It’s actually an excavated cave, first begun a millennium ago by another monk order, Saint Florent, who used the stone in the construction of their Abbaye La Belle d’Anjou, est.1040AD. Now invested with an artist commissioned installation of 35 architectural clusters, including carved pillars, capitals and arches,
the Underground Cathedral  is an ode to 10 centuries of skill and intricate labour
by the Loire’s inspired stonemasons. It’s also a contemporary contribution to the
storied, natural and cultural landscape between Sully-sur-Loire and Chalonnes; deservedly declared as a UNESCO World Heritage Site in 2000.

So, as you delight in this expertly made, dimensional and bubbly offering, see if
you can experience some hinting references to the land and the prideful culture
from which it comes. If you can’t, then be satisfied with having picked up several
bottles of an extraordinary value in the state-of-the-art, crémant wine making. 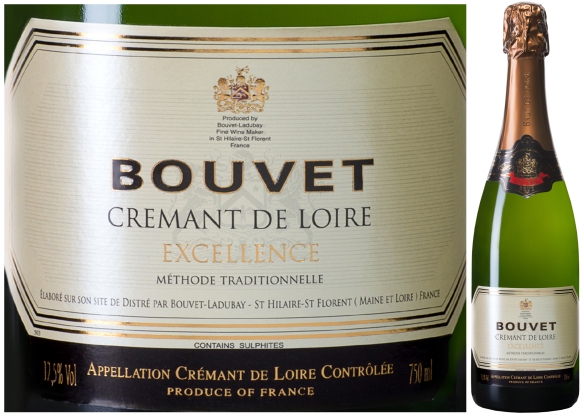 Made in: Loire, France
By: Bouvet-Ladubay
Release Date: August 8, 2015

Tasting Note
This is a particularly zesty, pale golden-amber, crisp and dry sparkler with a fruit
and honey bouquet, with some surprising berry flavour notes in among the
expected apple, pear and citrus. Try this as a spritzy apéritif with soft cheeses, charcuterie and hors d’oeuvres or with seafood and freshwater fish.