In 2011, the European Union reclassified wine in an effort to streamline the too
wide-ranging, comparative designations. In France, this now breaks down as AOP Appellation d’Origine Protégée: the premier classification with a fairly strict set of requirements; IGP Indication Géographique Protégée: an intermediate category
with more flexible regulations and a greater diversity of permitted grape varieties,
and lastly, Vin de France: a more generic designation that allows cuvée (blending)
of wines sourced from different French regions.

Languedoc-Roussillon is by far the biggest and most prolific IGP region, whose
2,800 wine producers are drawing on approx. 200,000 hectares of vineyard.
It also provides the namesake of d’Oc into the classification, likely derived from
Lange d’Oc: one of two still actively spoken Provençal languages, whose historic
and cultural roots lie in the formerly independent kingdom of Aquitaine. Present
day boundaries stretch between the Spanish frontier to the west, the Loire to
the north, the Rhône region of the Gard to the east, and the Mediterranean Sea.

Slightly over 90% of all Pays d’Oc IGP bottling is varietal wine though the grape
varieties employed in the modern age bear little resemblance to those planted by
Greek traders in the 5th century. Nonetheless, these are widely acknowledged as France’s oldest vineyards, producing many of the country’s best value wines. As
for Chardonnay, the latter descriptor is certainly the case now, 45 years on from
the comprehensive overhaul that was undertaken in the early 1970’s, replacing
large areas of unremarkable vine stock with noble grape varieties such as Cab Sauvignon, Merlot, Chardonnay and Viognier. Despite some rising and falling of commercial success, there’s been a steady commitment to quality-advancement
while maintaining competitive and attractive price-points.

Flourishing in a diverse set of global regions, Chardonnay can be finished in a
broad range of styles; influenced equally by climate and the variable traditions at
work in its source terroir. In Languedoc-Roussillon, apart from being a generally
hot and dry zone that yields fully mature grapes, the easy-drinking Chardonnay
style being produced here is decidedly on the lighter side of the sliding scale. As
for this week’s DéClassé featured wine: Villa Blanche Chardonnay from vintner
Calmel & Joseph – this is a delightful virtue. Their fruit is harvested in staggered
batches to maintain a balance of brightness and body, and since only about 30%
of the vintage is barrel-aged for three months, the oak presence is integrated.

This will unlikely be the richest or complex Chardonnay you’ve tasted, but it will
be an enjoyable, easy-going and satisfying partner for brunch or lighter, dinner
food-fare. Note that this perennial, regular listing favourite might be tucked into
the LCBO’s somewhat more exclusive Vintages section. That says a great deal
about this overachieving offering. Buy one, then if you’re inclined – half a case! 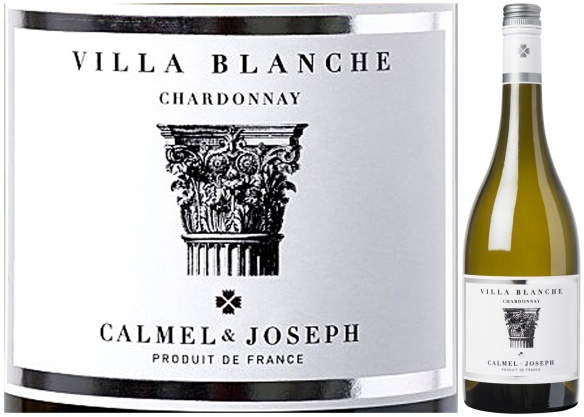 Made in: Roussillon, France
By: Calmel & Joseph
Release Date: September 5, 2015

Tasting Note
As expected from the region, this medium-bodied, light green-yellow wine has
pear and grapefruit aromas along with some delicate touches of vanilla and
butter flavour. A natural complement to oysters and mussels, you might also
try with Cassoulet: the signature dish of beans, sausage and confit of duck.