The Loire River Valley in west-central France has a long history of being a geographical and political demarcation line. In the 1st century, Imperial Rome used it to sub-divide their occupation of Gaul into two large areas: Aquitania to the south, and Celtica to the north. With the demise of the empire, Val de Loire continued to act as a borderland, separating the southern territories controlled by the ‘barbarian’ Visigoths, and the Gallo-Romans who renamed their northern realm as Syagrius. During the Middle Ages, and perhaps most famously, English Plantagenet King, Henry 2nd ruled the north while his erstwhile wife, Eleanor, held sway in Aquitaine. Spanning these diverse historical periods is a steady, unifying development of viniculture; eventually taking pride-of-place in the landscape and providing the modern-day Loire with an appropriate moniker, ‘garden of France.’ Winemaking legend suggests that a 4th-century monk, Saint-Martin, was first to introduce suitable vines for the terroir, and to promote an early form of pruning practice by having his donkey graze in the monastery vineyard; to strip the vines of their lower leaves and buds. It’s a critical cultivation step, where the limiting of harvest yields results in far more concentrated grapes and flavour. Nonetheless, the Loire’s vintners still manage to produce about 400 million bottles annually, with varietal Sauvignon Blanc output accounting for a large share of the total. 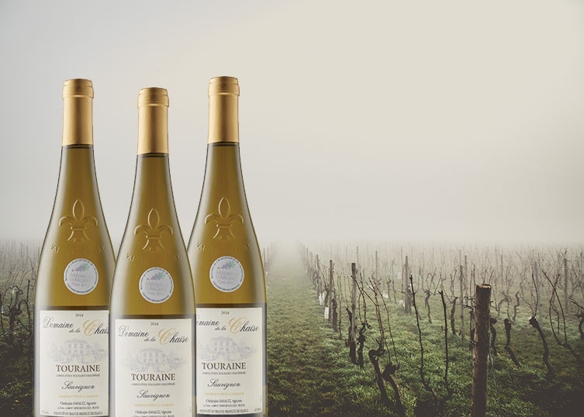 Centered on the city of Tours, the sub-region of Touraine is located where the valley’s namesake river meets two of its numerous tributaries; Cher and Indre. In turn, these fertile river junctions, the Indre-et-Loire and Loire-et-Cher, encompass 146 communes and an expansive list of winemaking châteaux that qualify for Touraine AOP designation. Among them is this DéClassé featured, Domaine de la Chaise and their Touraine Sauvignon 2014. Drawing fruit from vineyards that lie near the postcard-famed, white Château de Chenonceau, pedigree, and high standards are not in short supply!

Likely to have originated next door in Bordeaux, the Sauvignon Blanc variety is widely planted throughout the world and highly adaptable to a range of climates such as Chile, North America, and New Zealand. In the Loire’s maritime conditions, its characteristics of budding late, then ripening early, makes for a benchmark Sauvignon white wine that’s delicate, nuanced and balanced. At Domaine de la Chaise, they’re offering a refined example at a modest price. If you’re not a fan of overpriced, over-ripe and grassy Sauvignon, I suggest buying 3; to dispel your negative predisposition permanently!

Made in Loire, France
By: Christophe Davault
Release Date: July 9, 2016

Tasting Note
Refreshing, fruity and pleasingly tart, this is a classic Loire Sauvignon Blanc with citrus and subtle honeysuckle aromas. Grapefruit and pineapple flavours mark a medium-bodied wine with some restrained, herbaceous notes left to the finish. Try serving alongside a fresh pea risotto, arugula salad with a lemon vinaigrette or with cold shrimp, lobster, and crab cakes.