Alsace’s most reputable wine district is the geographic portion called the Haut-Rhin (Upper Rhine). Regionally centered on the ‘wine capital’ town of Colmar, its vineyards line the low foothills of the Vosges Mountains and roll out onto the adjacent river plain. First conquered by Caesar in the 1st century BCE, it was a desirable agricultural tract in the Roman province of Prima Germania for 600 years before becoming part of a Frankish Duchy in 496. After a long period of acting as a buffering borderland in the Holy Roman Empire, it was annexed by French troops in the late 17th century as a territorial spoil of
the 30 Years War. For the next 350 years, the contested strip traded Germanic and Franco occupation before settling as a hybridized people/culture within modern-day France; so it also is with their traditions of fashioning wine.

The Alsace AOC (Appellation d’Origine Contrôlées) was established in 1962 and its relatively stringent winemaking guidelines reflect the pride and ambition by Alsatians to codify their vinicultural expertise. Anchoring the north-east corner of France, this is the largest of 3 related appellations; representing 75% of the region’s vintners; sharing geography with a smaller group of select estates that carry the designations Crémant d’Alsace (sparkling) or Alsace Grand Crus. Their output of dry varietal whites such as Sylvaner, Riesling, Gewürztraminer, Pinot Gris, Auxerrois Blanc de Laquenexy, and this week’s DéClassé featured Pinot Blanc (Klevner) are widely regarded as benchmarks for more fulsome versions of the sometimes, too-lightweight counterparts produced elsewhere. In prudently embracing the challenges of high AOC standards, particularly the preference for quality over quantity, Alsatian vintners are guarding the regional
character that’s taken centuries to forge. Arguably, they remain in a leadership role for the cultivation/refinement of these cool climate grapes and wine styles; just ahead of their burgeoning competition across the German border!

Dating to the early 1700’s, the family estate of Joseph Cattin has long been a fixture in the Upper Rhine’s west bank vineyards that lie between the villages of Voegtlinshoffen and Hattstatt. Providing the namesake for the winery, Joseph was a 20th-century pioneer in combating Phylloxera, a pest that wrought such widespread devastation in European vineyards for decades. Apart from carrying on with the development and expansion of a modest 7-hectare property, he also studied and developed vine grafting techniques that would become the viticulture model for many Alsatian growers to finally subdue the blight. Here now, in a prolonged period of critical and commercial success, note that this modestly priced Joseph Cattin Pinot Blanc 2015 is adorned with a Gold Medal from the prestigious 2016 Paris Concours Général Agricole; underscoring the
consistent level of achievement and value for this vintner’s mid-range wines! 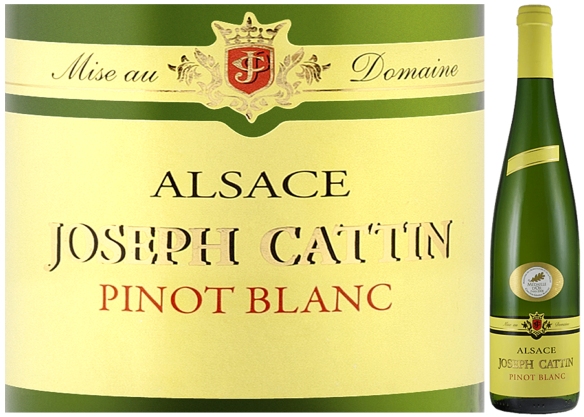 Made in Alsace, France
By: Cattin Frères
Release Date: November 12, 2016