Despite having been quietly tucked away in the autonomous province of Castilla y León for centuries, the Bierzo DO region is re-emerging at the forefront of modern Spanish winemaking frontiers — as a reliable source of regionally distinctive, high-quality wines. What’s far more longstanding than this newly minted status are the region’s Roman-era gold mines, Templar Castles, and a host of medieval monasteries serving as way stations on the famed pilgrimage path, Camino de Santiago. Geographically acting as a funnel into the verdant northwest corner of the Iberian peninsula, the various valleys of El Bierzo make up the upper basin of the Sil River system whose waters are fed by runoff from the Montes de León and the Cordillera Cantábrica mountain ranges. Aptly referred to as the ‘gateway to Galicia,’ which in turn is characterized as ‘green Spain,’ the fertile and rumpled territory of Bierzo marks the bountiful transition zone. Though still a relatively small and less-well-known Spanish region in the international wine market, Bierzo’s rising reputation for winemaking is fueled by a unique climate of Atlantic and Mediterranean influences that moderate each other’s extremes; making for conditions where both red and white wine grapes thrive. Capitalizing on this natural blessing, the 55 major Bodegas of Bierzo are impressively outputting 11 million liters of wine annually, and with the optimistic trend by local vintners of rehabilitating their older, under-producing plots, the vineyard expansion continues at a healthy/sustainable pace. 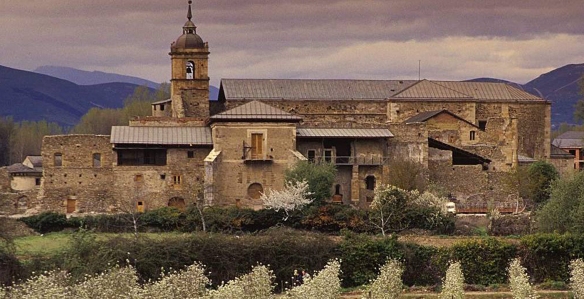 Though taking the inspiration for its name from the inactive, neighbouring abbey of Monasterio de Santa María de Carracedo that dates to the 10th century, Bodega del Abad (‘the Abbot’s Cellar’) only became active as an independent producer in 2003. Initially developed under the guidance of a legendary winemaking master, José Luís Santín-Vázquez, the Bodega already boasts a loyal following that was engendered by a surprising release of a 2001 Crianza-grade cache of their earliest vintage; one which had been hiding somewhere in the dark back corners of their cellars. This week’s DéClassé feature of Abad Dom Bueno Crianza 2006 is also a surprising re-release that’s being offered for a 4th consecutive year. Evidently, the current vintner, Miguel Tienda Baena, has exercised discretion in evaluating the character of this particular vintage; one that’s been settling for eleven years now. Unsurprisingly, it’s evolved into a soft and rounded bottling, but surprisingly, still possesses some fruitful vigour, mineral streaks, and a reasonable level of enlivening acidity.

These balanced attributes point to many factors of winemaking accomplishment while bringing to bear modern production techniques, but also revealing the innate potential of Mencia. Indigenous to Bierzo, and with a significant increase in plantings since the 1990’s, the rising star variety has joined the list of the four most important Spanish red wine grapes: Tempranillo, Garnacha, and Monastrell. Producing compact grape clusters of medium-sized, violet-blue berries, its renaissance of popularity has been bolstered by an ability to yield age-worthy wine at relatively modest price points. 35 hectares of this bodega’s vineyards are located up on steep terrain made up of slate and quartzite-laden soils where the mix of old vines, with some approaching 70 years-of-age, continue to yield characterful fruit. When meticulously handpicked and sorted as they are at Bodega Del Abad, the harvests are creating wines that are characteristically fleshy, velvety, and bursting with red berry flavours.

This bottling is certainly ready to please now, and as it’s a yearly favourite for LCBO Vintages customers, it will evaporate from the shelves quickly as the word of this gem’s reappearance spreads. If you’re not an optimist when it comes to storing wine, then just buy enough to get you through the upcoming spring, summer, and Fall!

Tasting Note
Though gracefully aged, this still offers juicy red cherry and currant flavours with subtle herb, vanilla and chocolate accents. A refreshing acidity enhances the core of soft tannins, so it could stand to be slightly chilled before decanting. Try serving with rich poultry dishes such as blackened Cajun chicken, a roasted leg of herbed lamb, Balsamic and ginger marinated steak or with spicy beef empanadas.