In the 1650’s, while toiling to create productive fields at the end of a rutted ox wagon trail that connected with the small coastal outpost of Cape Town, farmers also had to keep their ears tuned for a tell-tale shot ringing out from the heights of Kanonkop (‘cannon hill’). Repeated by a string of relay-cannons, the booming signal would eventually reach the remotest inland settlements; announcing the port arrival of a sailing ship requiring fresh provisions! Resupply and repair of the Dutch East India Company’s Maritime fleet at the southern outcrop of Africa was a compelling motivation in the 17th century for founding Cape of Good Hope as a refueling station; critically positioned halfway between Atlantic home ports in the Netherlands and the Indonesian trade colonies of Batavia that lay across the Indian Ocean and Java Sea. Included on the checklist of ships’ stores was the need to replenish their bottled spirits. The French Huguenot settlers who had been enlisted by the Dutch company recruiters were quick to transplant grapevines into this untapped agricultural paradise, then sell onboard the finished wines!

With some justified claim to being one of the Cape’s renowned white grape varieties, the plucky, old, and gnarly bush vines that produce Chenin Blanc thrive, unirrigated, in this dryland region’s crushed granite soils. Challenged by these conditions, the long-lived rootstock has learned to burrow deeply; drawing on the mineral-rich nutrients and moisture that have percolated downward in the rocky terrain. As is often the case with grapevines, environmental stresses promote the development of more characterful fruit; invested with a nuanced layering of flavour. The desirable combination is evident in this DéClassé featured bottling of a historically unheralded, though now renascent, Chenin Blanc wine style. Well suited to the terroirs of the continent’s southernmost tip, this vintner has aptly and evocatively named the offering, Vinum Africa. 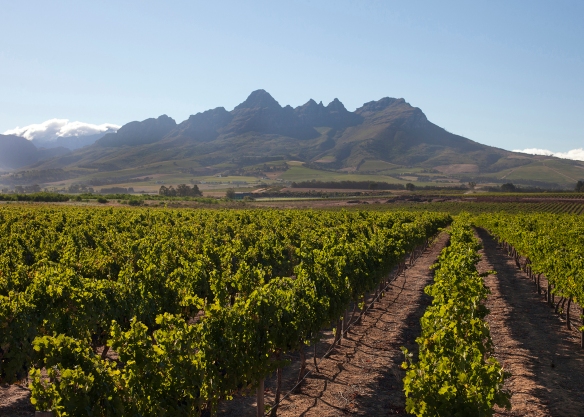 Comprising 20% of South Africa’s total cultivation and output, the winelands of the Stellenbosch region in the Western Cape continue to rise in the competitive ranks of reputation. The somewhat younger, ocean-facing vineyards of the Winery of Good Hope lining the lower slopes of the Helderberg (bright mountain), are one cornerstone of a farming enterprise that’s at the creative forefront of exploiting the advantages of a dynamic wine region, and its motivated cadre of world-class winemakers. Hands-on harvesting, manual sorting, and careful selection lead the production process where natural fermentation of the grapes takes place in stainless steel tanks. While a majority of the harvest is left to linger on the expired yeast (lees), infusing the batch with some subtle toasty notes, the other 30% is transferred to mixed generations of Oak barrels where it takes on its spice accents. The final blend and resting of both components for several months is a key step in a recipe that imbues the still-crisp acidic fruit with considerable aromatic depth and range. It’s also the measurable distinction for how Chenin Blanc develops a more rounded flavour profile in SA; contrasting the leaner versions that are fashioned in its native France, where it’s known as Pineau de la Loire.

The striking embossed symbol acting as a label combines an ethnic flourish with the Latin term Vinum (wine) and was conceived as an expression of the positive political, historical and social progression in a revitalizing South Africa. Proudly playing out their part, the passion, and care of these vintners is palatable in the glass. This is a lovely layered wine, offered at a very reasonable price-point and we’re very fortunate to have access to some of the limited cases from the 2015 vintage!

Made in: Stellenbosch, South Africa
By: The Winery of Good Hope
Release Date: March 4, 2017

Tasting Note
Medium-bodied, fragrant and dry, try serving this zesty wine with Mediterranean dishes, grilled vegetables of all sorts, sushi or as a compliment to Asian cuisine. It’s also very satisfying as an apéritif with goat cheese canapés or onion tarts.