Book-ended to the top and bottom by equally renowned neighbours, Burgundy and Provence, the Côtes du Rhône region straddles the namesake river’s banks for approximately 200kms from Vienne in the north to just below Avignon in the south. Encompassing 170 villages, this was once part of Narbonese Gaul where Romans founded terraced vineyards around Vienne late in the 2nd century BC, though some significant development in the region’s wine-making history corresponds with the surprising arrival of Popes in the 14th century. Displaced from their traditional seat in Rome due to the so-called western-schism, a splitting of the Catholic Church, and hemmed in by the upheaval of France and England’s 100 Years’ War, the papal retreat to Avignon was prolonged for nine successions. Competitively inclined, the exiled Popes and Cardinals developed ever-larger farming estates on tracts of Rhône Valley lands that had been ceded to the church by various minor French rulers — becoming known as the Comtat Venaissin. Gradually expanding the vineyard plantings secured a local wine source and also provided revenue from the export of surplus production. 500 years onward, long after the Popes had vacated their summertime residence at Châteauneuf-du-Pape (Papal Castle) to reoccupy the Vatican, the Rhône region’s epicenter of Avignon was anointed with a new title in 1966. This time, though, with the secular designation — ‘Capital City of Côtes du Rhône Wine.’ 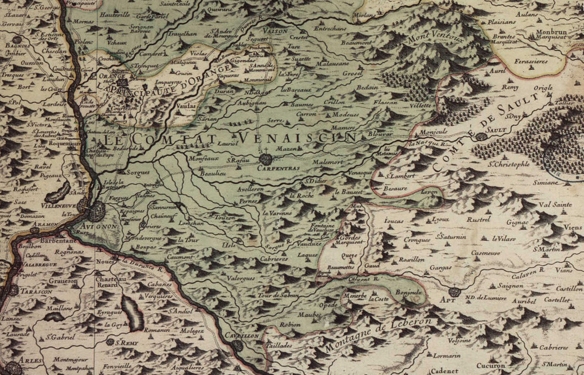 What is perhaps less well known to longer-term readers of DéClassé, is that along with their primary output of signature, blended red wines, the Côtes du Rhône vineyards also produce a small host of notable white grapes and related wine styles: Clairette Blanche, Bourboulenc, Marsanne Blanche, Viognier, Muscat Blanc, and in the case of this week’s featured bottling — a blend of 80% Roussanne with 10% splashes of Grenache Blanc and Ugni Blanc that qualifies for Côtes du Rhône AOC (Appellation d’Origine Controlée) standards.

The Famille Castor, comprised of 5th generation winemakers, Gérard and Jeannette, along with their inheriting sons, Jérémie and Raphaël, now the 6th in the lineage, are demonstrating that there are few shortcuts in mastering the juggling act of expanding vineyard holdings from 7 to 150 hectares, developing a distinctive character in their wines, and being commercially viable at very approachable price points. Look no further than here in this DéClassé featured bottling of Château Saint-Nabor Côtes du Rhône White 2015 – for very convincing evidence that it’s possible to keep ‘all the balls in play.’ At home in the nearby medieval village of Cornillon, their father, the mayor, still keeps a watchful and supportive eye on his sons’ stewardship at the winery. I’ll muse that he has very little to fear, concerning the immediate future and the continued success of the family endeavour. To this end, you could make a small contribution by picking at least 3 or 4 of these attractive bottles – at $13.95, why wouldn’t you? 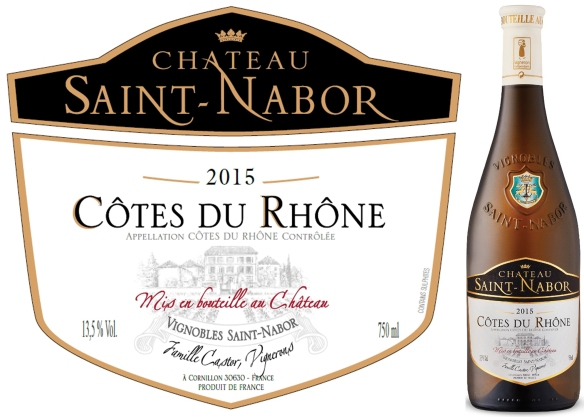 Tasting Note
Stone fruit, delicate tropical notes, and a hint of waxed honey mark the flavour profile of this somewhat more unusual, mid-bodied white wine. Perfectly satisfying as an apéritif with salmon canapés, pear, camembert and prosciutto wraps, you might also try serving this alongside a cold platter of smoked fish or mildly spiced Asian and Indian dishes.