Characterfully part of the Occitanie region in southwest France, the hamlet of Pinet sits six miles inland from the unusual coastal zone of a saltwater lagoon, the Etang de Thau. In spite of a modest population of 1,300, this is the heart of the Picpoul de Pinet AOC and so has a disproportionately high concentration of winemakers who specialize in the fashioning of Picpoul – once the favoured style for Emperor Napoleon III. Regionally distinctive, this premium white wine is made with a lesser-known, golden-skinned grape originally called Piquant-Paul, later as Picapulla, and finally now, Piquepoul Blanc.

Referencing the grape’s high levels of acidity and mineral accents, Picpoul’s name translates as ‘stings the lip’ – though it doesn’t really, of course! Historically, this lively fruit was blended with another obscure variety, Clairette, creating a tangy wine style called Picardin – millions of liters of which were shipped northwards along the networks of canals to Paris each year. Susceptible to various pests, the vines fell out of vinicultural favour in the late 19th century. Able to thrive in sandy Mediterranean soils, Picpoul Blanc is once again a resurgent variety in the coastal vineyards that surround Pinet.

Pinet is also home to the cooperative Cave de Pomerols. Founded in 1932, this group now boasts 350 growers who tend to over 800 hectares of highly productive vineyards in a landscape that is basically a chalky-clay plateau, rich in limestone, quartz gravel, and otherwise covered with Garrigue. Lining the coast, this indigenous vegetation is made up of small aromatic bushes, which like the local grapes, have gradually adapted to thrive in the near-drought climate of summertime. Though challenging, these growing conditions are fortuitously punctuated by late season humidity, thereby encouraging the fruit to plump up and reach full maturity before harvest.

As in this week’s DéClassé recommended bottling of Beauvignac Picpoul de Pinet 2016, the traditional varietal white wine style is dry and citrus-scented. It also has a long-standing reputation for being a perfect complement to shellfish – with the wine’s acidity balancing the saltiness of the food. However, Picpoul is generally food-friendly, as well as, fulfilling when served alone as an apéritif. Don’t expect a big-bodied white wine here, rather be prepared for a delightful succumbing to its beguiling lightness and verve. 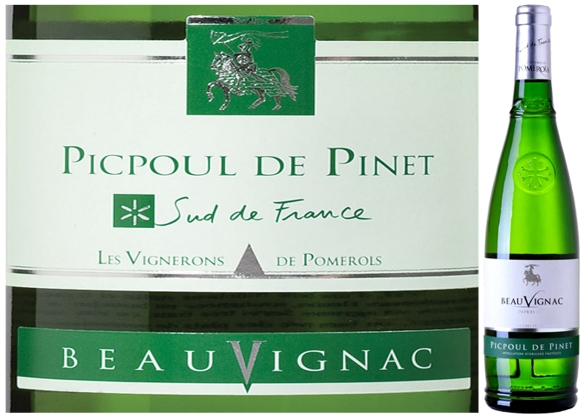 Made in Midi, France
By: Les Costières de Pomérols
Release Date: May 27, 2017