Bookended to the top and bottom by its equally renowned neighbours, Burgundy and Provence, the Côtes du Rhône region straddles the namesake river’s banks for approximately 200kms from Vienne in the north to just below Avignon in the south. Part of Narbonese Gaul, Romans founded terraced vineyards here late in the 2nd century BC, though some significant development in wine-making history corresponds with the arrival of Popes in the 14th century. Displaced from their traditional seat in Rome due to the so-called western-schism, a splitting of the Catholic Church, and hemmed in by the upheaval of France and England’s 100 Years’ War, the temporary papal retreat to Avignon would be prolonged for 9 successions. Competitively inclined, the Popes and Cardinals established farm estates on tracts of Côtes du Rhône lands that had been ceded to the church. Gradually expanding the vineyard plantings secured a local wine source and provided revenue in the exporting of surplus production. 500 years onward, long after the Popes had left to reoccupy the Vatican, Avignon was again anointed in 1966 – this time with the secular designation of ‘Capital City’ of all Rhône wines. 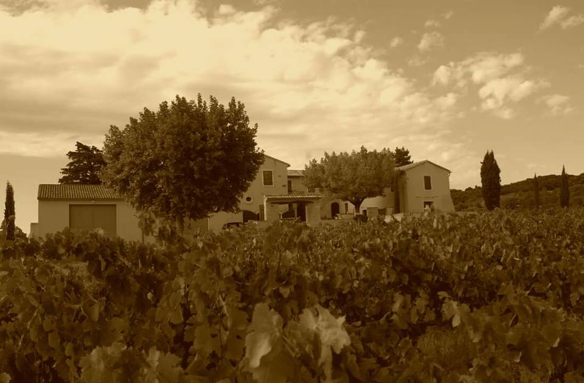 Vintners along the somewhat cooler stretch of the valley north of Montelimar make varietal wines exclusively with Syrah grapes, whereas wineries in southern zones produce the classic GSM blends built with Grenache, Syrah, Mourvèdre – or GSMC in which Carignan rounds out the recipe. This DéClassé recommended, Château Le Grand Retour – Plan de Dieu is a robust 60/30/10% GSM blend extracted from 45-year-old vine stock. Rooted in stony limestone or red clay soils typical of the Plan de Dieu sub-region, this geographic ‘God’s Plain’ has a localized, hot and dry climate, making the terroir ideal for the full maturation of its signature grape varieties. Lying at the base of the Dentelles de Montmirail foothills, the plain encompasses vineyards that surround the towns of Camaret-sur-Aigues, Violes, Jonquieres, as well as, the source of this week’s feature bottle from Travaillan. Despite being a relatively new appellation created in 2005, the Plan de Dieu AOP classification with the ‘Villages’ qualifier, indicates a more distinctive quality of wine than that of the generic Côtes du Rhône AOP. The unique bottle style also features Plan de Dieu as an embossed coat-of-arms: a cluster of grapes framed by a halo!

Château Le Grand Retour is one of a trio of winemaking estates that the three Aubert brothers have overseen since the 1980’s, carrying forward and further developing the foundation and traditions begun by their father. 150 hectares of this property was originally established by Algerian immigrants, who again left France for a time. On returning, they found the now mature plantings ready to bear fruit–providing the inspiration for the Domaine’s name, ‘the major return.’

The same sentiment can also be applied here to this bottling since it’s become a yearly Vintages release that always seems to exceed the generalized pedigree as an entry-level, southern Rhône wine. In my pocketbook, this Plan de Dieu trumps lower end offerings of Châteauneuf-du-Pape – and for the same price, I can buy 3! 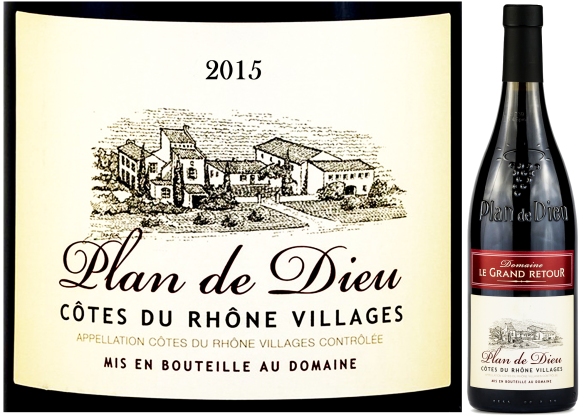