Mexican winemaking tradition is built on a historical foundation dating to early
in the 1520’s. Begun by and under the direction of the conquistadors, these
vineyards of ‘New Spain’ eventually became so successful that exports from
Spain to the Americas dwindled. In 1699, in response to the loss of revenues,
Spain’s King Charles II decided to prohibit all wine production in the colonies,
except for the making of a supply for the Church! This prohibition stayed in force
until 1821, finally only ending with Mexico’s independence from colonial rule.
Many missionaries refused to abide by this royal edict and in quiet defiance, they
continued to produce wine locally on a small-scale. Particularly significant in the
region was the work of Jesuit priest Juan Ugarte, who’s credited with planting
the first vines in Baja California when he arrived at the Loretto mission in 1701.

Since then, L.A. Cetto has become Mexico’s most successful exporting winery,
drawing on 1,200 hectares in the Valle de Guadalupe and continues to build on
the expertise and craft provided by its namesake Don Angelo Cetto – an Italian
immigrant who arrived in 1924. Following DéClassé’s recommendation of the
2011 vintage, this medium-bodied red from Anno 2012 again displays that soil,
climate and evolving skill in the vineyards of the arid Baja Peninsula is resulting
in highly competitive alternatives to the much-pricier offerings being produced
just across the border to the north.

Nonetheless, this varietal wine does owe its heritage to California’s Napa Valley
in the 1880’s, where the source grape was first imported and proliferated as a
variety which could resist mildew. In directly referencing the diminutive size of its
berries, early planters confused the vine for a Syrah clone, naming it (aptly, they
thought) ‘Petite Sirah’. Though still subject to continuing, vinicultural speculation,
it is now generally recognized as a variation of the French parent vine ‘Durif’.

With its attendant, naturally high levels of both tannins and acidity, it’s inherited
the ability to age and develop an even richer complexity – but is fully ready now. 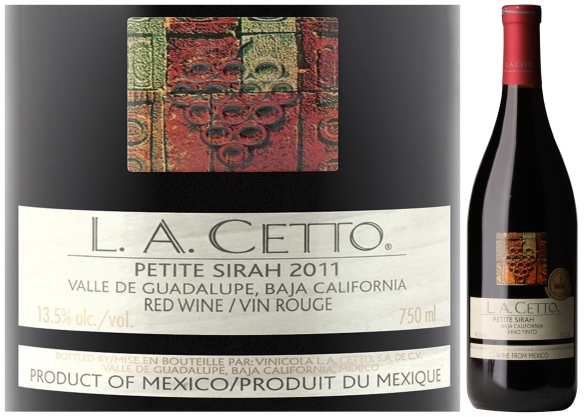 Tasting Note
This earthy, spicy style of wine with formidable tannins and vanilla oakiness is an
ideal partner to serve slightly chilled with hearty and savoury dishes of all sorts
including ratatouille, fajitas, grilled mushrooms, peppers, beef or lamb.