Pinot Gris is a white wine grape that originated in the neighbouring vineyards of
France’s Burgundy, then was proliferated around Europe – notably popularized
in Italy in the latter part of the 20th century where it’s known as Pinot Grigio.
Derived from the larger Pinot family of grapes, this pink-skinned version with low
acidity and relatively high sugar levels does very well in cooler growing conditions
such as Alsace and across the border around Baden, Germany.

Dating to the early 1700’s, the family winemaking estate of Joseph Cattin has
been based in the heart of the Alsatian vineyards south of Colmar, between the
villages of Voegtlinshoffen and Hattstatt. This storied region on the west bank
of the Upper Rhine near the German border has excelled at cool-weather grape
styles since the Middle Ages. The namesake of the current estate, Joseph, was
an early 20th century pioneer in combating the Phylloxera pest which did so much
damage throughout Europe and beyond. Apart from continuing the development
and expansion of what was then a modest 7 hectare property, he also studied
and subsequently developed vine grafting techniques which ultimately became
the viticultural model for many Alsatian growers to overcome the blight.

Later generations expanded the estate to over 50 hectares, as well as, engaged
numerous local growers to cultivate according to the family’s exacting standard.
With most of the combined vineyards sheltered in among the south-east facing
foothills of the Vosges mountains, these terroirs of the Pinot Gris AOC d’Alsace
with their highly variable soils and moderate climate help the vines yield a broad
range of early ripening fruit with well-rounded character.

This 2012 offering won Gold at the 2013 Concours Général Agricole de Paris
– this win being a follow-on to numerous medal accolades for previous vintages. 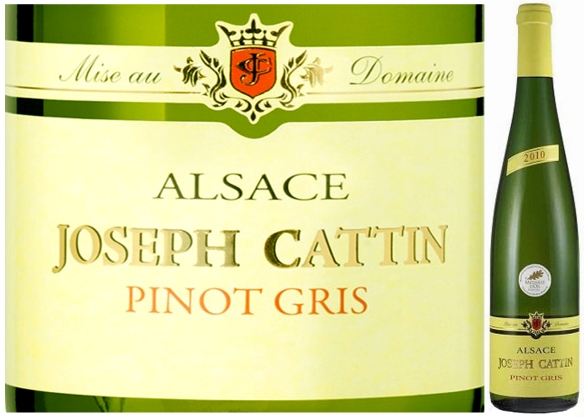 Tasting Note
As is more typical with this wine style in an Alsatian version, it’s richer than its
Italian cousins with aroma and flavour notes of stone fruit, accented by hints of
almond and honey. Try serving this with a broad range of vegetable-based dishes,
pasta and cream sauces, or as an apéritif with foie-gras.