As was mentioned in DéClassé late last year, while announcing the release of
the 2013 Nouveau stock, I promised to eventually feature a more fully aged and
developed version of Beaujolais to remind us that this wine style has a range of
sophistication – beyond the fun, simpler, ‘never been in the barrel’ versions that
appear on the 3rd Thursday of each November. In dedicating this week’s focus on
what is an often charming, medium-bodied wine, I’m also hoping to dispel some
of the dated scandal and derision that resulted in depressed sales of the output
from the Beaujolais AOC during the last 3 decades or so. Due to various follies, including overproduction in the 80’s when the ‘Nouveau craze’ really took hold,
the proud and storied Beaujolais vintners have had to be energetically engaged in
a public relations campaign to re-establish a well-deserved, favourable reputation.

In among 96 Beaujolais villages that are grouped together north of Lyon, in the
so-called gastronomic capital of France, the region’s highest-quality wines are
produced from the ten official ‘crus’ vineyard clusters – one of which is Morgon:
home to some of the 250 associated vintners, collectively marketing under the
umbrella marquee called Vignorons de Bel-Air.

Gamay Noir, one of the predominant varieties grown here, is an early ripening,
acidic type processed using a carbonic maceration method. The still-bunched
grape clusters are layered into fermentation vessels, with the bottom crushed
under the weight of those on top. The resultant juice begins its fermentation,
saturating the must in carbon dioxide. Since the grapes ferment as a whole berry,
this process tends to yield up very bright, colourful wines with low tannin content
along with a markedly, fruity flavor profile.

This week’s selection is the seasonally branded Hiver Gourmand – Silver Medal
winner at the Concours Général Agricole de Paris 2013, where any showing in
the upper 3 tiers of awards is a significant accomplishment for a $18 bottling! 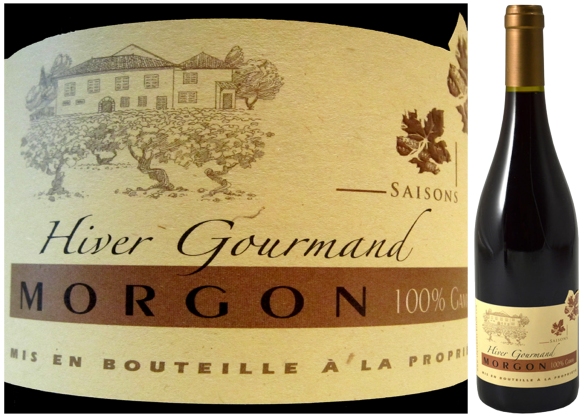 Tasting Note
Plentiful black plum, cherry and some hints of raspberry aromas and flavours.
Earthy with moderately firm tannins and a fine acidity gives it balance. Try with
food fare such as charcuterie, roast veal, duck a l’orange, turkey or goose.