Firmly part of territorial France in the 21st century, Alsace has been enriched by
its dual Frankish and Germanic cultural history, but has also experienced some
geopolitical upheaval due to the competing aspirations of its 2 parent nations:
Colonized by 1st century BC. Romans; then allied with the Medieval Holy Roman
Empire a millennium or so later; occupied by ambitious 16th century French Kings;
annexed by Germans in the late 19th century during the Franco-Prussian War;
ceded back to France in the terms of armistice following the First World War
and finally, after many areas were entirely destroyed in the second world war
bombing campaign by Allied forces – reaffirmed as French again. Throughout
all of this tumult, steadfast Alsatians have rebuilt and found many ways to keep producing fine grapes and a highly distinctive quality of wines.

Geographically bookended by the banks of the Rhine River to the east and the
Vosges Mountains westward, an undulating, fairytale-like landscape of verdant
vineyards is punctuated by castles on hilltops and half-timbered, half-plastered,
colourfully painted villages and towns such as ancient Sigolsheim. This is home
to this week’s DéClassé recommended, varietal bottling of a Sylvaner: Alsace’s
lesser-known, golden-yellow grape. As is often the case with once-popular styles,
in cycles, careless overproduction of a high-yielding grape to satisfy the market, can result in the making of unremarkable wine; thereby depressing demand or
eroding a producer’s reputation. Arguably, this is somewhat more Sylvaner’s
legacy across the border in Germany rather than in northern France. Here, the
AOC standards established in the1960’s, better ensure a judicious practise of pruning to tailor yields and traditional, hands-on harvesting to boost quality.

Bernard Sparr is the current vintner heading Maison Pierre Sparr Successeurs,
following in the lineage of 9 family generations that date to 1680 and the reign
of Louis X1V. Proud Alsatians, the House of Sparr has been tending to their 37
hectares of vineyard in the Haut-Rhin (upper Rhine) for a very long time. In the
modern age, they’ve expanded collaborations with a select group of regional
growers, drawing fruit from an additional 150h. With this increased output the
brand has evolved into one of the region’s more renowned and identifiable.

Sylvaner is a delicate and charming summer white, whose release onto shelves
here should be on your calendar of time-limited selections to be on the lookout
for; this time of year. Stock up and serve this dry wine chilled, though not cold,
or you’ll miss some of its subtle layering of citrus, apple and pear flavours. 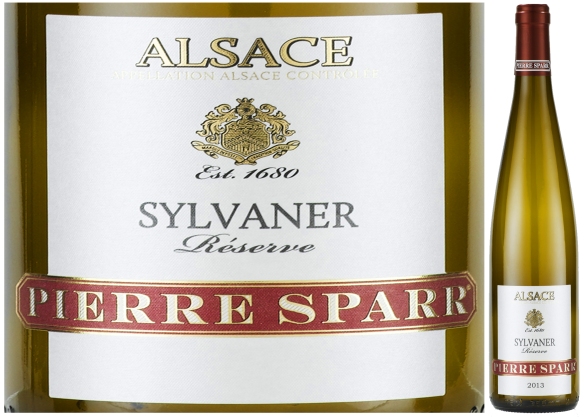 Made in: Alsace, France
By: Cvb Maison Pierre Sparr Successeurs
Release Date: May 16, 2015