Having begun with the planting of its first vineyards in the so-called new world by
16th-century Spanish conquistadors, Chile’s somewhat surprising 500 year-long
history of making wine coupled with the recent development of new vine growing
regions – continues to impress and amaze. For a time, as of the mid-1800’s, its
output was of a middling grade, aiming to produce reasonably well-made bulk wine
for local markets and consumption. This fact is equally true of many, so-called old
world regions in Europe during the same time period and through to the middle of
the 20th century. Chile though has not simply kept pace with the rise of highly competitive, premium wine production and export, rather it has become a leader
on this globalized scene. They’re excellent wine makers!

Revealingly expressed in the often difficult history of the indigenous Mapuche
(earth people), is a reputation for personal courage, strong communal identity
and a fierce and unconquerable spirit. An essence of this carries forward, as
modern Chilean vintners continue to innovatively exploit challenging geography
for agricultural cultivation while demonstrating great concern for sustainability.
Framed between an endless Pacific coastline to the west and Andean peaks to
the east, the regional designation called Entre Cordilleras (between mountains)
is a collection of verdant, inland valleys including Colchagua: home to some of
the wine world’s most progressive vineyards – excelling at fashioning Malbec,
Syrah, Carménère and Cabernet Sauvignon wines.

For this week’s DéClassé recommended bottling of a ripe Syrah, the source is
Ninquén, meaning ‘Plateau on a Mountain’ and so it is. The 27-year-old Antu
estate is a visionary addition to the holdings of Viña MontGras, whose guiding
philosophy is based on the highly selective integration of agriculture into the
rugged, natural landscape. There’s very little that’s rough in this offering from
the brothers Hernán and Eduardo Gras, having spent 16 months settling in a
combination of 30% new and 70% second use, French Oak barrels. It’s ready
to be uncorked, though you might challenge yourself to put several aside for
another year – after having tried one now, outdoors at an upscale BBQ. 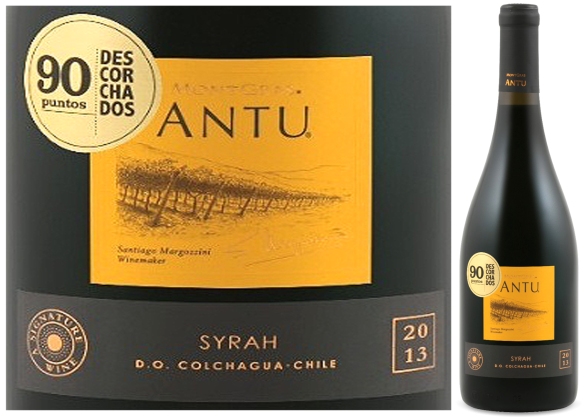