With some justified claim to becoming one of the Cape’s greatest white grape
varieties, the plucky, old and gnarly bush vines which produce Chenin Blanc do
so well because of their ability to thrive in this region’s arid, unirrigated, crushed
granite soils. Compelled by the dryland conditions, the root stock burrows deeply,
seeking moisture and mineral-rich nutrients. As is often the case with grapevine,
the stresses, counter-intuitively, promote development of characterful fruit with
more-nuanced layers of flavour in the finished wines. That’s certainly the case in
this week’s DéClassé recommended bottling of a historically overlooked though
now resurgent white, varietal style from this continent’s southernmost tip: the
aptly and evocatively named Vinum Africa.

Comprising 20% of South Africa’s total cultivation and output, the winelands of
the Stellenbosch region in the western cape continue to rise in the competitive
ranks of reputation, both locally and internationally. Blessed with a diversity of
micro-climates and soil composition, its potential was first recognized by French
Huguenots who arrived in the 1690’s and immediately began planting vines. The
somewhat younger, ocean-facing vineyards of the Winery of Good Hope line the
slopes of Helderberg (bright mountain) and are a dynamic farming enterprise at
the forefront of creatively exploiting this emerging, wine making terroir.

Hands-on harvesting, manual sorting and selection lead a careful production
process where fermentation of most of the grapes takes place in the coolness
of stainless steel tanks. While it’s left to linger in the expired yeast (on its lees),
infusing the batch with some subtle, toasty hints, the other 30% is transferred
into Burgundian Oak barrels where it takes on its spiced accents. Final blending
of both components is the recipe key which allows for a balance of freshly acidic,
still-crisp fruit endowed with considerable aromatic depth.

The striking symbol acting as label, combines an ethnic flourish with the latin
term Vinum (wine) and was conceived as an expression of the positive political,
historical and social progression in a revitalizing South Africa. Proudly playing
out their part, the passion and care of these vintners is palatable in the glass.
This is truly a lovely, layered wine, offered at a very reasonable price-point. 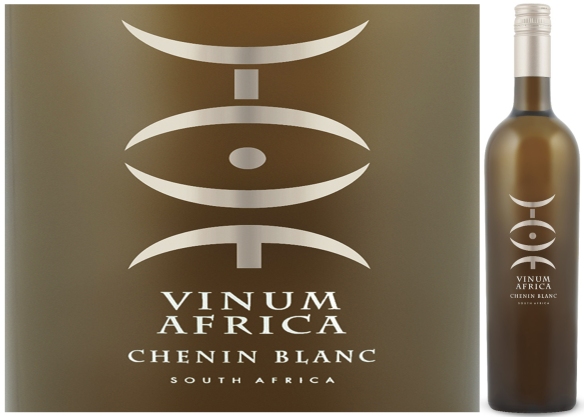 Made in: Stellenbosch, South Africa
By: The Winery of Good Hope
Release Date: May 16, 2015

Tasting Note
Medium-bodied, fragrant and dry, try serving this zesty wine with Mediterranean
dishes, grilled vegetables of all sorts, sushi or as complement to Asian cuisine. It’s
also satisfying as an apéritif with goat cheese canapés.

Gioia, a small picturesque town centered on a 13h century castle, is the heart
of Puglia. This strategic coastal region nestled between the Ionian and Adriatic
seas, inherits its fame, in part, from the fortuitous exploits of a legendary Queen
who stumbled onto a cache of buried, precious stones. Having them made into
a necklace, she gave Gioia del Colle its translated moniker: “Jewels of the neck”.

Rife with colourful folklore, this is also the reputed birthplace of Primitivo wine,
where local history records another popular tale of a 17th century Benedictine
monk Francesco Primicerius, who having discovered the first wild vines thriving
in the gardens of his monastery, he further cultivates and begins transplanting
them into the surrounding fields. With the experience and learning from many
successful harvests, its classification and name are derived from several Latin
terms, loosely translating in meaning as ‘the first to ripen’ – and so it does.

Looking to the present day, this grape has a relative that flourishes in California,
grown as a genetic twin called Zinfandel. Moreover, after long-term speculation
by viticulturalists, both varieties are determined to be descendants of an older
Croatian parent grapevine: Crljenak Kastelanskj (aka Plavina). The Italian clonal
version featured here though, is somewhat lighter, a bit drier and significantly
more price-competitive than most American ‘Zins’ – most of whom carry an
unwarranted price tag for what is a relatively straightforward-to-grow grape
and uncomplicated wine style!

Punctuated by the Salento Peninsula, referred to as the ‘heel’ of south-eastern
Italy, the astonishing level of winemaking output is building on ancient traditions
that were first begun by enterprising Phoenicians, then followed by the Spartans
who settled here in 706BC after emigrating from Greece. As seems to be the
case with so many resurgent regions in Italy, the focus on well made, bulk wine
production, aimed toward local consumption – is shifting qualitatively upward, to
better-satisfy the standards and competition of an international market.

Cantine Coppi is one of many progressive, regional vintners making the leap and
consistently delivering higher quality table wines as with this week’s DéClassé
recommended bottling of their Peucetico. Having earned a dependable place in
the Springtime, Vintages release schedule, you had better grab several, as it will
be leaving the LCBO shelves by the caseload. 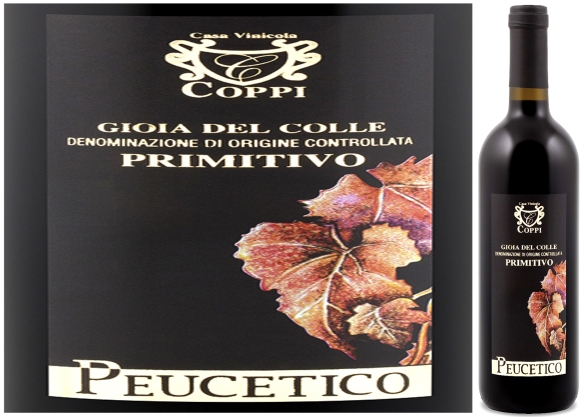 Tasting Note
A very fruity palate typical of the grape style with aromas of mixed berries,
plums, spice and vanilla. Try with some classic comfort foods such as pasta
Bolognese, veal scaloppini with sun-dried tomato or a Neapolitan pizza.

Proudly displaying the dramatic, four-armed Visigoth symbol that dates to the 7th
century; later known as the Languedoc Cross or Cross of the Cathars, the four
elements and its twelve points of the zodiac represent the perfect and perpetual
cycle of time and nature. This vintner’s very apt emblem also includes 2 doves
drinking from a single cup – expressing both sharing and communion. Begun by
father Georges, a winemaking pioneer in the Languedoc region who diligently
worked to foster a spirit of cooperation among local growers in the 1970’s, this
benchmark winery has consistently been at the forefront of quality development
for an impressive range of regionally distinctive wine styles. A multi-generational
philosophy is being carried forward by the founder’s son Gérard Bertrand, with
an ever-expanding portfolio of 10 estates, 550 hectares of vineyard and primary
production facilities proudly based around Narbonne in south-central France.

On a landscape of windswept scrublands that border this Mediterranean shore,
the calcium-rich, grey-white limestone of a former seabed is punctuated with
thyme, wild lavender and undulating rows of gnarled Syrah and Grenache grape
vines. As with the land, wine-producing regulations of this free-spirited region
are less stringent than in the neighbouring Burgundy or Bordeaux appellations,
allowing for a broad range of varieties to be cultivated and blended – with these
2 starring grapes often providing the backbone. Syrah ripens more quickly than
its blending partner, so gets vatted in whole bunches first, while the somewhat
delayed harvesting and destemming of the Grenache fruit catches up later on.
Transferred into large 225-litre Bordeaux barrels to age for at least 10 months,
it’s then bottled and left to settle in for many more. In the case of this week’s
DéClassé recommendation – it’s been another 3 years.

Though you will find many bottlings from this prolific vintner on the regular LCBO
shelves, note that this particular release is only stocked in the Vintages section.
With warmer days ahead – dare to try this big, fruit-forward red slightly chilled! 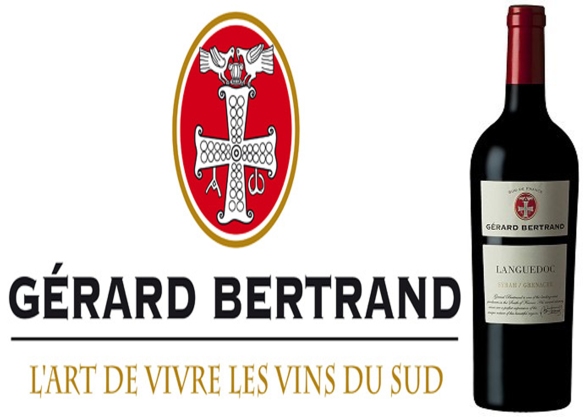 Tasting Note
This is a firm and fairly spicy wine style that is best enjoyed with foods such as
stuffed peppers, meatballs in spiced tomato and olive sauce, grilled meats, fire
roasted vegetables and stronger, ripe cheeses.

The historical vineyards of Costières de Nîmes roll out on a landscape framed
between the towns of Nimes and Arles. The Rhône’s most southerly appellation
produces consistently well-made, rich, fruity red and Rosés and has done so for
a very long time. With tales of the elixir being consumed by the ancient Greeks,
these may be among the world’s oldest known varieties of grape vines. The local
variants from this French region continue to thrive and the winemaking business
remains enduringly renowned and strong.

Acting as a geographic divide between Languedoc to the west and Provence to
the east, the Rhône delta region is the meeting of the Rhône, Durance and Gard
rivers before their combined flow spills outward into the blue Mediterranean Sea.
Sandy alluvial soils mixed with red shale contributes to the unique character of
these classic Rosés with their blend of Grenache, Syrah and Cinsault. Grenache
provides the raspberry and earthen aromas; Syrah typically adds structure with
its tannins and dark fruit flavours such as blueberries and blackberries, while the
Cinsault, with its soft, fragrant characteristics, lifts the aromatics of the wine.

Located 35 miles from famed Châteauneuf-du-Pape, the Mas Des Bressades
estate is also considered a premier producer, though its offerings are available
at far more modest price-points. Under the enthusiastic guidance of the current
vintner Cyril Marès, 6 generations of vinicultural practices continue to evolve. To
fashion this particular form of finished wine, a so-called Saignée method is used.
Literally meaning “bleeding” in French, it involves making the light coloured wine
as a by-product of red wine fermentation, where a portion of the pink juice from
the grape must is removed earlier on, then fermented separately as Rosé.

As many DéClassé readers have come to appreciate, Rosé from the regions in
South-eastern France are very dry, food-friendly wines that are far more delicate
and rounded than many of the sweeter, less-dimensional new-world versions. If
you still need additional motivation to revisit this woefully under-appreciated style,
then dare try this as a delightful contribution to your Mothers’ Day celebrations! 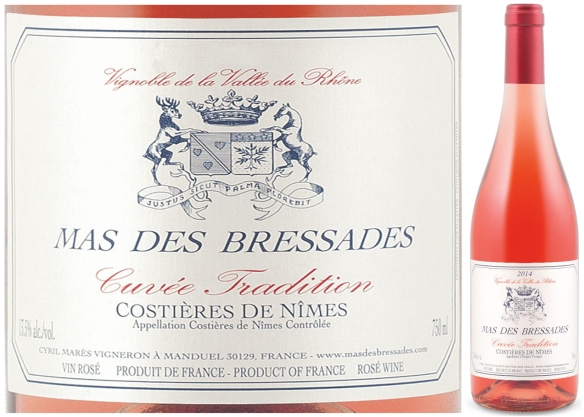 Tasting Note
Bright pink/orange in colour with aromas of cherry, strawberry preserves and
melon. Dry, fresh and fruity with a surprisingly plump structure. Moderate acidity
and a medium-long finish. Try matching it to pan-fried scallops, or a herb chicken
stuffed with feta cheese and olives.